Norway’s largest financial group, DNB, is continuously looking for people with IT skills and is the first company in Norway to offer work experience in programming and innovation projects for refugees settling into the country. Two of the interns in this program will develop and test upon the Furhat robot. 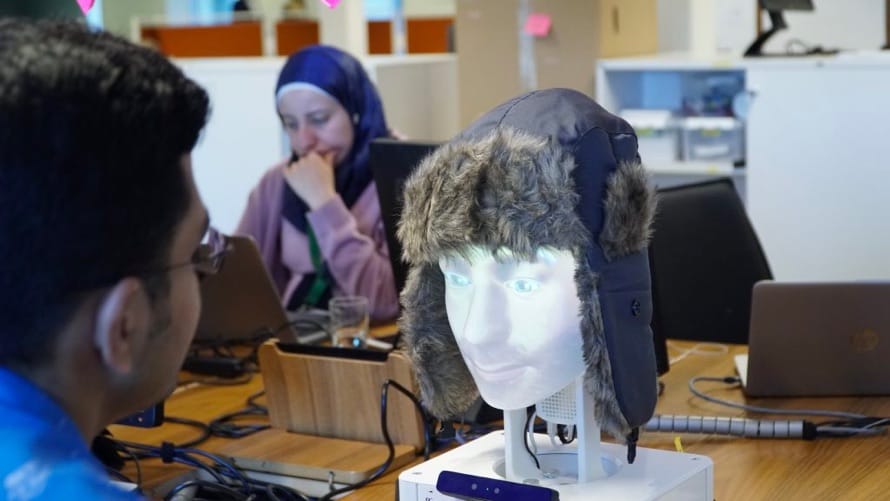 This initiative became a reality after the start-up company, In: progress, on behalf of DNB, recruited nine newcomers with skills matching a pre-set list defined by DNB. The Norwegian financial group has now offered them work experience where they will collaborate within three innovation projects together with DNB employees over a two week period.

All nine refugees are from Syria, including one woman and eight men. Each intern will work with an exciting IT project, in which two will participate in a project to develop and test a socially intelligent robot that the Swedish startup Furhat Robotics from KTH in Stockholm recently sold to DNB. The new arrivals will investigate whether DNB can use Furhat as an interface to make digital services less scary and more accessible to specific target groups.

“Furhat Robotics’ vision is to enable people to communicate with technology on the same terms as we communicate with each other. This initiative contributes to new and important perspectives on our development platform. Furhat is a tool that fits perfectly for integration, since the ability to customize the robot’s appearance, voice and behavior is great. Therefore, applications such as language learning can be successfully built. Additionally, I feel extremely warm at heart about this project, as I also originate from Syria”, said Samer Al Moubayed, CEO of Furhat Robotics.

“Furhat Robotics’ vision is to enable people to communicate with technology on the same terms as we communicate with each other. This initiative contributes to new and important perspectives on our development platform.”

Difficult to get relevant work experience

Although many new arrivals have the competence that companies need, few of them will be able to apply for relevant work experience before their knowledge is perceived as outdated. It is the contractors behind In: progress, Sandra S. Skretting, Marte Sootholtet and Linn Tomasdotter, who want this to change. Their business idea is to match talented and highly educated newcomers to companies that need their knowledge of business development and innovation. DNB is the first company in Norway to use the new service.

“We are pleased that DNB contacted us and wanted to do this. We see great potential to engage in collaborations with large groups like DNB together with other startups like Furhat Robotics to provide more people with relevant work experience. There, these people can also contribute their experiences to innovative projects that often require a variety of perspectives, “says Linn Tomasdotter.

“For DNB’s part, this is about new thinking and utilizing the expertise that exists around us. At DNB, we also want increased diversity on different levels. It will contribute to innovation and value creation”, says Group Vice President IT and Operations in DNB, Liv Fiksdahl.

The new arrivals will gain significant work experience during the two weeks at DNB, while the company will, in turn, see if they can get more talent with IT skills. Furhat Robotics gains a broader community of developers on its platform, who focus on creating new uses cases for new audiences.

“Whatever outcome, this program benefits all parties. The nine refugees receive relevant experience in Norwegian working life while at the same time integrate into the new culture and become acquainted with people and perspectives that we rarely encounter in a regular recruitment process”, says Fiksdahl.