– Partnership strengthens Stockholm’s position as one of the world’s most innovative and forward-thinking cities
– The robots, developed by Swedish startup Furhat Robotics, will assist in teaching students about AI, machine learning, Mathematics, and sustainable energy 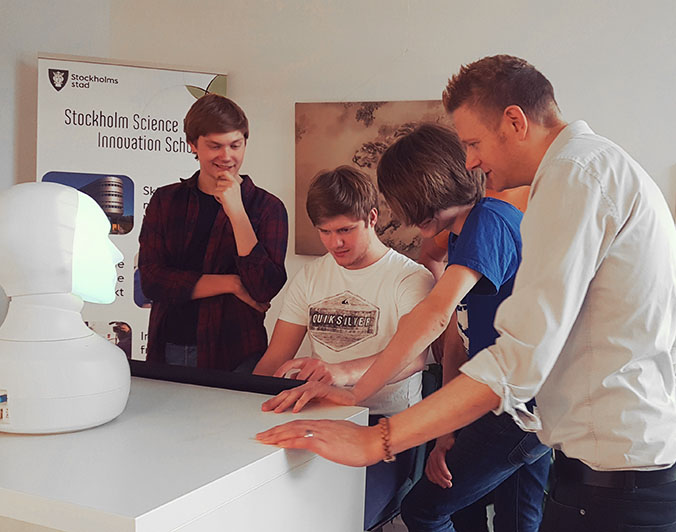 Stockholms Stad, the Municipality of Stockholm, has announced it is beginning a groundbreaking trial program where social robots from Furhat Robotics will be used in classroom settings to investigate how they can contribute to learning.

Early research from Kungliga Tekniska Högskolan (KTH) in Stockholm shows that social robots can be more effective as a learning tool than many other technical interfaces, such as digital avatars. With this test, Stockholm Stad Education Administration aims to understand how technology, in this case social robots, can improve the learning environment and process.

At Stockholm Science & Innovation School (SSIS), a gymnasium school in Kista, the robot will help students learn about AI, machine learning, and sustainable energy; while at Nya Elementar, an elementary school in Bromma, 5th grade students will use the robot to learn more about Mathematics on a more basic level. The Stockholm Stad Education Administration has emphasized that the initiative is intended to examine if social robots can act as a compliment and tool for teachers to enhance learning, and will not replace teachers.

Says AnnMarie Taylor, CIO, Stockholms Stad Education Administration, “As IT Director one of my main tasks is to give the city’s schools the opportunity to develop new digital solutions which contribute to new innovations. It’s up to the pedagogues and students to determine if the new solutions are useful, and how to further develop their use. Placing a social robot in a classroom to see how the teachers and students can find new applications for them, to enhance learning, is incredibly exciting learning experience. It also gives us at the IT and Digitalization unit guidance as we continue building the schools of the future.”

Says Samer Al Moubayed, CEO and co-founder of Furhat Robotics, “We’re honored that Stockholm Stad selected Furhat for this project. Stockholm is already one of the best EdTech cities in the world, and these trials prove that it’s a commitment the city takes seriously. Sweden is a role model in so many sectors, showing how easy it is to change the world for the better, and we’re proud of our Swedish DNA. We hope and believe that this project with Stockholm Stad will inspire others around the world to start these kinds of initiatives!”

The robots which will be used have been built by KTH-based startup Furhat Robotics, and are currently the most advanced social robots in the world. The robot consists of a head with a 3D face projected onto a mask, and communicates with its surrounding much the same way as humans do: by listening, observing, speaking, and expressing complex emotions. The robot is already being used in various contexts throughout society, from a project with TNG to create an unbiased recruiter robot, to health pre-screening robot PETRA developed with Merck Group Sverige.